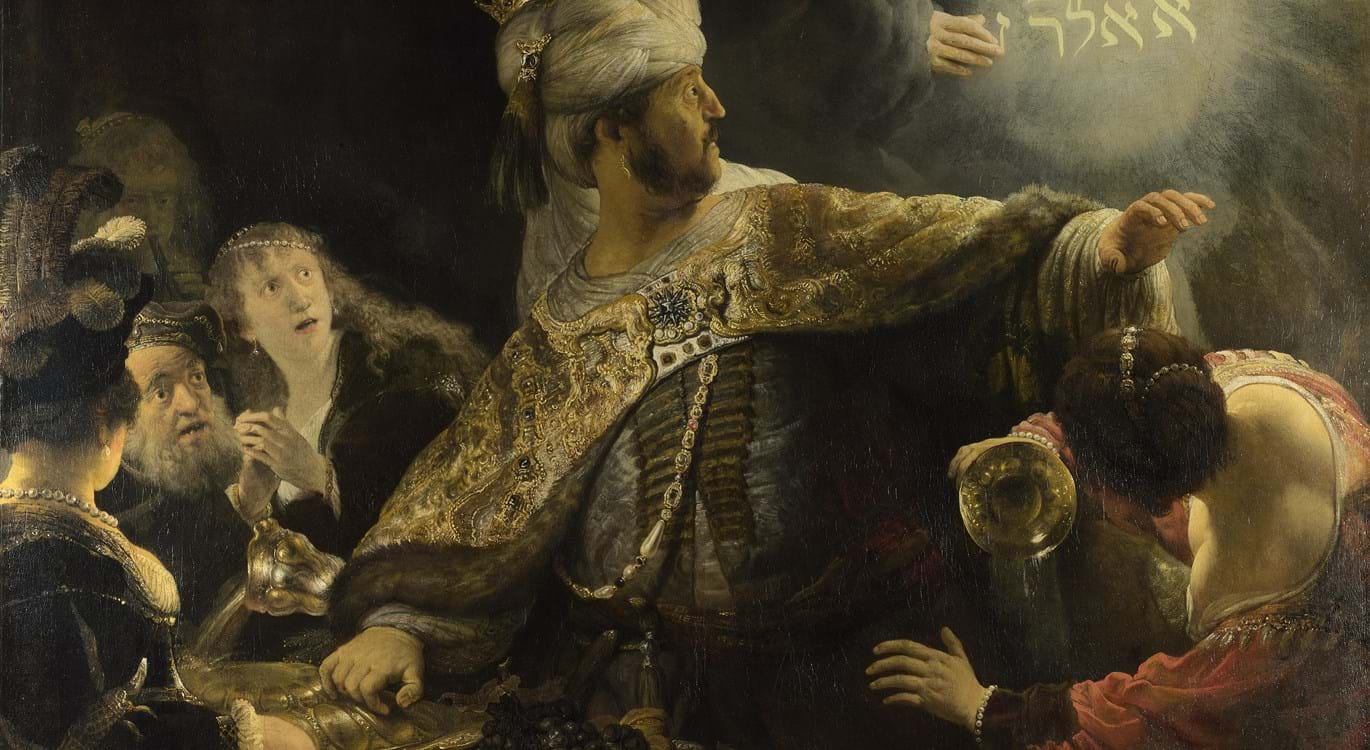 I was used to people being derisive towards my Christian faith, but I couldn’t remember ever seeing an advert that was so openly hostile towards God.

The Atheist Bus Campaign of 2008/09 displayed this slogan on public transport to encourage people to consider a humanistic worldview. Like me, many Christians were shocked by the blatant defiance of the crusade. And yet, the sentiment accurately captures the spirit of the age.

And not just this age, for one person who thought like this was Belshazzar, as we find him in Daniel chapter 5. Scripture does not record him denying God’s existence, but he certainly lived like there was no God. His main concern in life was pleasing himself. However, far from liberating him and bringing him enjoyment, this autonomous, self-centred attitude only brought disaster. The rejection of God always sends a person down a pathway that ends in ruin.

When God is disregarded, a door is opened which allows an individual to do whatever they like, provided it’s within the bounds accepted by society. Of course, this is an attractive proposition, but it robs us of the true purpose for which we were created – “to glorify God, and to enjoy Him forever” (The Westminster Shorter Catechism). Once this purpose is removed, the highest goal is our own enjoyment and pleasure.

Belshazzar is the epitome of this attitude. The narrative identifies three contributing factors.

In verses 3 and 4, Daniel describes how Belshazzar dared to take the temple vessels that belonged in the house of God and drink from them. Many years before, his grandfather Nebuchadnezzar brought them up from Judah and put them in the Babylonian idols’ temple. But Nebuchadnezzar did this in ignorance, not understanding what he was doing.

Belshazzar, on the other hand, had full knowledge – he knew about Nebuchadnezzar’s experiences with God and subsequent acknowledgement of His greatness; he knew that the temple vessels signified the glory of God, but still he did not consider Him. This is nothing short of deliberate blasphemy, wilful defamation of the character of God.

2. He is detached from reality

During the events of Daniel chapter 5, the Medo-Persian army was amassing outside the city. Belshazzar’s response was to throw a huge party. He was that conceited, believing he was completely untouchable and there would be no day of reckoning for him.

His attitude is very typical of a modern mindset; he has no interest in the truth, he just wants to have a good time.

3. He is a self-centred show-off

In verse 1, Belshazzar is drinking wine “in the presence of the thousand”. He wants everyone’s eye to be on him. Lennox notes “pleasures and desires were his supreme values. By the same token he had evaluated God at zero” (John Lennox, Against the flow, Monarch Books, 183).

The progression is significant. Belshazzar’s downfall began by disregarding God. This is not, as many think, an inconsequential decision; it leads to detachment from reality, as rationality and morality both find their basis in God. With reason and ethics set aside, there is only one destination – debauched behaviour, leading to the judgement of God.

Sadly, Belshazzar is not a one-off case. Everyone lives to please the chief object of their affection. In individualistic societies like those found in modern Western countries, the thing that many people love most is themselves, even though they may not like to admit it. The emergence of expressions like “me time” and “self-love” reflect the narcissistic culture of the day. Rather than God-worshippers, we have become self-worshippers.

The finger of God

The naturalistic approach adopted by most atheists allows life to be lived in a convenient little bubble. Under this worldview, we can decree morality according to our own subjective preferences rather than objective truth. We can then live as we please, and when we die, that’s the end of us . . . and of any personal consequences for our actions.

There is no potential for anything outside of the physical universe to enter into our experience; certainly not a God who will hold us accountable for our behaviour.

The record of Daniel chapter 5 shows that this does not reflect reality. In verse 5, something happened that Belshazzar, in his atheistic mindset, did not expect. The spiritual world interacted directly with the natural world, “the fingers of a man’s hand appeared and wrote opposite the lampstand on the plaster of the wall”.

Belshazzar’s party is about to become God’s courtroom.

The writing’s on the wall

To be consistent with what they believe about God, atheists have to believe that actions have no ultimate consequences, that we live in a universe devoid of morality. A universe where a man like Adolf Hitler can cause the deaths of millions, take his own life and escape justice forever.

The Bible presents a totally different perspective on reality, one that we all intuitively know – that there is such a thing as justice. It tells us that sinful actions deserve punishment, that wicked deeds deserve retribution. This applies to everyone; the book of Revelation foretells a day when “the dead, small and great, [will stand] before God, and books [will be] opened . . . the dead [will be] judged according to their works” (Revelation 20:12).

This applies to Belshazzar, too, in spite of his exalted position; as Daniel would reveal, the writing on the wall foretold his impending doom.

Learn from others' mistakes

At the centre of the condemnation of Belshazzar is this statement, “But you . . . have not humbled your heart, although you knew all this” (verse 22, emphasis mine). The basis of God’s condemnation was not what Belshazzar did, but what Belshazzar did knowing it was wrong. God had given Belshazzar all the evidence he needed from the testimony of Nebuchadnezzar (verses 18-21) but the king ultimately chose himself and his pleasure over God and His glory.

The same decision-making process is followed by many in the modern world. The evidence for God is overwhelming – the existence of space, time and matter, moral intuition and the eyewitness testimony recorded in the Bible all point towards the existence of God.

The atheistic position is assumed in spite of evidence, not because of the lack of it. Its adherents refuse to contemplate the existence of God, because they have rejected Him not with their intellect but with their will. The resistance to the divine is in their hearts, not their minds. Then, having dismissed God with their will, they use their (often considerable) intellect to attempt to rationalise their worldview.

Man thinks he has all the answers but, plainly, he does not. Belshazzar had access to the greatest intellects of the day but even he had to admit that he was dependent on divine revelation: “light and understanding and wisdom . . . interpreting dreams, solving riddles, and explaining enigmas” come from God (verses 11-12). Although Belshazzar did not learn from Nebuchadnezzar’s mistakes, we should learn from his.

As the scene unfolds, it becomes clear that not only does God exist, He reigns. Part of reigning is administering justice – upholding law and order. Because God does not intervene to deal with evil immediately, some have assumed that this means He does not exist. We noted in a previous article that the long-suffering of God has been mistaken for His inadequacy, or even His nonexistence.

The apostle Peter anticipated this mindset: “scoffers will come in the last days, walking according to their own lusts, and saying, ‘Where is the promise of His coming? . . . all things continue as they were from the beginning’” (2 Peter 3:3-4). He proceeded to tell his audience that God will bring judgement to bear in His own appointed time, explaining “that with the Lord one day is as a thousand years, and a thousand years as one day. The Lord is not slack concerning His promise, as some count slackness, but is longsuffering” (2 Peter 3:8-9).

Daniel chapter 5 also makes it clear that God is neither inadequate nor nonexistent. As Daniel interpreted the meaning of the writing for Belshazzar, the king began to understand his mistake: “MENE: God has numbered your kingdom, and finished it; TEKEL: You have been weighed in the balances, and found wanting; PERES: Your kingdom has been divided, and given to the Medes and Persians” (verses 26-28).

As God allows people to go down the path of their choice unhindered, it may appear that He is indifferent, but in reality He is numbering their days and weighing the value of their actions. While He is patient and long-suffering, there comes a point when He says “enough is enough” and His judgment falls. Not only is God active in the affairs of great empires, He is also involved in the lives of every individual.

Belshazzar thought he had acted autonomously, free from giving account to a higher power . . . because he believed he was the highest power. But he was wrong. There is a higher authority than man. As the universal sovereign, God upholds ultimate law and order. Paul’s words reassure us: “He has appointed a day on which He will judge the world in righteousness” (Acts 17:31).

Justice will prevail. Every wrong will be put right. His kingdom will come. His will shall be done.